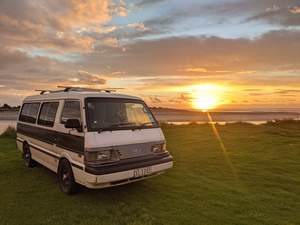 Turn left at the fork in highway six, and before you know it, the flat pastures and low hills full of sheep will have fallen behind you.

You'll wind along the Buller river for hours, arc along the canyon bottom it carved over eons, stare up at the huge mountain ranges covered in green to either side.

Then, in a bend in the road, everything will open up. The Buller spreads into a delta. The mountains give way to the sea.

Looking back, they'll stand as giant green ridges, lush and packed so densely with trees and ferns and vines that a few feet in, almost no light makes it to ground. A mix of the folding cliffs of Hawai'i and the undulating, relentless green of North America's Pacific Northwest.

There are fewer sheep out here, and even fewer people. Town now means anywhere four or more houses are clustered, and one shop pretty much does everything. Westport, the big city, juts out as the major hub for a hundred miles.

And the people you do find? Well, it's time-travel, really. Lots of things work on the honesty system. Most of the food is local. Folks are quick with a smile, and quicker to help out - and also happy to give you your space.

Nobody moved out here for the company.

The past few days, I've been parked just above the estuary where the Mokihinui river meets the Tasman sea. Waves crash upriver at high tide. The river pushes them back out to sea six hours later, with gusto and a fair bit of driftwood if there's rain in the mountains.

At night, I'll build a fire, wince at bites from namu, marvel at the stars. And I'll wonder how we got so far from all of this. And if it's worth it.

Find some wild this week, wherever you are. :)

🙏.s I know folks are probably tired of me pitching the Patreon down here, but it really is filling up with awesome stuff these days - there's bonus stories from the road, lots of pictures, and I just uploaded an epic video: The Best Shots of Van Life, Volume 2.

You can hop in for as little as $2 a month - and as a working artist, it really, really helps me out. Thanks for considering it. :)

p.s. The best thing I saw all week was a couple of baby seals playing in the surf. So I pulled out my phone and shot a video of them. It's not great quality because I had to stand a ways back, but it's still pretty darn adorable. :)

Tells me you loved it!
Love
Shows your friends how awesome you are.
Share
Makes you look smart to your followers.
Tweet
© Ink and Feet, 2021