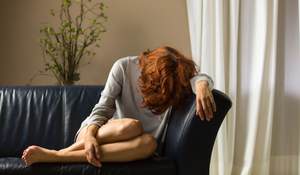 What To Do When You're Depressed

But over the almost 30 years I've spent with this particular monster, I've learned a lot about what helps, and what doesn't. I've done research. Tried experiments. Gotten help, and gone it alone.

Over the years, bit by bit, those learnings have made my life a lot better.

Here's everything I know.

Accept that you get the weird, energy-sucking flu.

Let's do a quick check. Do you have bouts where a few or more of these apply to you?

If so, you've probably got depression. I know - that's a loaded statement that often makes all kinds of shitty feelings come up.

Let's stop ‘em in their tracks, and talk about what depression really is.

Depression is a weird, energy-sucking flu.

That's it. It shows up when it shows up, gets better when it gets better, and has funky side effects. It's not contagious, and you're not going crazy.

You're fine, sane, and totally normal. You just get the weird, energy-sucking flu.

Lame, but alright. Let's see what you can do about it when it shows up.

It's ok. This will pass, and you'll be back to your superhuman self. But in the meantime, it's time to cancel what you can, and lower what you're asking from yourself.

Do stuff that you care about, even though you feel bad.

One of the most proven-effective things you can do when you're in a depressive episode is to do stuff that you care about, while acknowledging that you feel shitty.

This will not necessarily make you feel better.

But it will mean that - even on the low-energy depression days - you brought something you believe in into the world.

But always, you'll have spent your life on the things you care about. That turns out to be surprisingly empowering.

Tell your support people who get it.

If you already have good support people who get it and don't make you feel like you're carrying the bubonic plague, tell them your Aunt Dee has come to town, and let them help you. You can skip on to the next point.

If you don't have those people yet (and pretty much none of us are born with them,) that's ok. You can get them. Here's how.

You know people in your life who care about you.

You also know people who are capable of taking a step back, looking at their own behaviors, and changing them.

Your support people need to have both of those qualities.

This means they may not be the people closest to you. That's ok. Your close people are still awesome. Nobody's good at everything.

To find your good support people, make a list of people for each characteristic. Then, see who shows up in both lists.

Those are your support people.

Next, reach out to them.

I wrote this guide for support people to read - How to Help Someone Who Has Depression. If it works for you, feel free to pass it on.

If it doesn't, cool. Reach out in the way that works for you. What you want to make sure to communicate is:

Help usually just looks like being able to listen, accept, and not try to fix things. It's pretty easy - but it's not an intuitive reaction. That's why they need our help to know what to do.

Once you've got your people, let them know what's going on, and let them help you out (this likely will also feel weird and unpleasant. It's ok. It feels that way for all of us.)

Now you've got support. As for everyone else you know…

While depression's in town, just ditch everyone who isn't one of your support people.

Doesn't matter if they're your mom, your close friend, or the president of your social club. If they bug you for a response, tell ‘em you're slammed and that you'll get back to them in a week or two. Then let them go.

This isn't a crazy Machiavellian idea - it's just a reality.

As we talked about above, you've got a small fraction of your normal energy. Those people are going to take it without giving you support back.

For the moment, take a break from them.

They'll still be there when Aunt Dee has left town.

Find things that take no energy and give you comfort and support.

For me, pizza makes that list. It's delicious, gives me dinner (and breakfast!), and makes me feel happy and comforted. As a bonus, a person who requires no energy from me will deliver it for a very reasonable fee.

Other things that work well for me include video games, writing, and listening to music.

Your list is likely to be different. Find the things that work for you, and use the energy you have to engage with them.

Pro tip: Depending on how good your memory is, you may want to make a list of those things that you can pull out when depression stops by. I have a file on my computer called "Things to do when I'm depressed." It's full of things like pizza, and playlists that make me feel good. When depression rolls in, I just pop it open. One less thing to worry about.

One really critical thing to have is a safe place you can out get all the things that churn around in your head.

For a lot of people (including me), writing or journaling does this well. Some people make videos. Some take photos. Some talk to themselves, or their dogs or their plants.

Regardless of how you do it, find a way to get the weird thoughts out of your head and into the light of day, where you can see them for what they are - weird thoughts because of the weird flu you currently have - not you.

Know that this will pass.

Like the flu, if you take care of yourself, give yourself rest, and stay engaged with the things that matter in your life, your depression is likely to pass on its own.

Just like the flu, it's also possible that you get the Killer Gnarly Flu of Aught-Eight, and you'll need to call in the doctors. But most of the time, it passes, and one day you'll notice that you're feeling pretty normal.

Sidebar: The Deep Dark Places, and When to Get Help.

How do you know when it's time to call the doctors? Think of it the same as you would a flu. When you're really sick, you go to the doctor. You know when that is. Trust yourself.

But this one's also tough. I've been in super scary places where I thought about killing myself, including planning a few times, and trying once.

There aren't easy answers. When you're in that dark hole, there aren't really any clear reference points to tell you that those thoughts of life isn't worth living or I'm worthless or nobody would miss me are the weird flu, and not you.

I'll tell you this.

No matter who you are, where you live, or what's going on in your life,

Those thoughts are the weird, brain-bending flu, not you.

You are valuable, people would absolutely miss you, and even though life has its rough patches and the world isn't a fundamentally fair place, it's worth living.

You have those thoughts because of the weird energy-sucking flu.

If they're sticking around, and they start feeling more like you than man those are some crazy thoughts in my head, it's time to call for backup.

Head to a doc. I've seen them myself. Sometimes you just get a a gnarly, killer-flu episode. When those come, the doctors (who are generally good people who don't treat you like you're crazy) really do help.

Know you're not alone, and there's not one thing wrong with you.

You're struggling with it because depression is in the deck for humanity, and you happened to get the cards. Lots of us did.

You and I are a couple of them. Welcome, my friend, to the depression club.

Pass me some pizza, will you?

Note: Thanks to the overwhelming response to this post and its companion piece (a million readers from 193 countries?!), I've actually written a book that covers this and a whole lot more, with the same honest tone.

It's called The No-Bullshit Guide to Depression, and you can check it out here (or at your local bookstore!)


Also, if you're dealing with depression right now and money's tight, click here to learn about getting a copy for free.

Tells me you loved it!
Love
Shows your friends how awesome you are.
Share
Makes you look smart to your followers.
Tweet
— More Writing —
2017, and One Big Wish
The Letter for January 1, 2017.
A 1,300 Year-old Poetry Slam
The letter for November 6, 2016
What I learned in a Colombian hospital
Life is a funny thing.